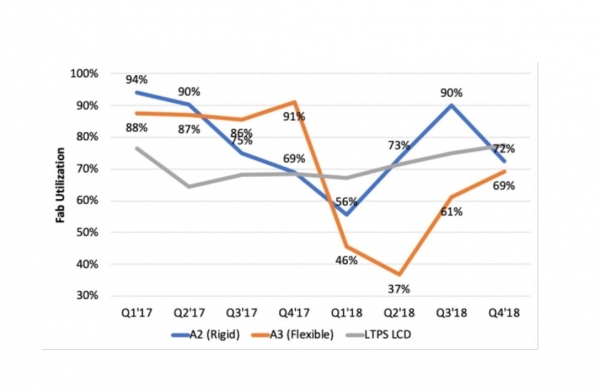 The operation rate of Samsung Display’s OLED production line, which had fallen has risen sharply. This is due to Chinese smartphone manufacturers on OLED adoption and Apple's launch of new iPhone products. However, it has yet to recover from the first half of last year.

According to the data from market research company DSCC (Display Supply Chain Consultant) on the 15th, the operation rate of Samsung Display's A2 Line that produces Rigid OLED panels increased from 73% in the second quarter to 90% in the third quarter. The operating rate of A3 Line, which produces flexible OLED has recovered from 37% to 61%.

The increase in operation rate of the A2 Line is due to Chinese smartphone manufacturers. Samsung Display's Rigid OLED displays have been used for Huawei's P20 Pro, Xiaomi Mi 8 Pro, and One Plus 6. Huawei, Xiaomi, and One Plus shares have been recently rising, due to its brand image as a 'good' Chinese smartphone companies. According to the Counterpoint Research`s sales data for the third quarter, Huawei shipped 52 million smartphones, a year-on-year increase by 33%, and Xiaomi shipped 33 million to 35 million of smartphones, growth from 20% to 25%.

The A3 Line operation rate recovery is attributed to the launch of premium smartphones such as Apple's new iPhone and Samsung Galaxy Note9.

Samsung Display’s investment direction is dependent on Samsung Electronics' successful launch of its Galaxy S10 smartphone, which is scheduled for next year. An industry representative said, “If Wireless Business Department takes confidence in its next Galaxy S10, it will also speed up operation of A4 Line and increase visibility into investment in a new A5 plant.”

Although Samsung Display has acquired equipment to its new A4 Line plant, it has not been able to match its supply due to a rapid reduction of demands for panels.